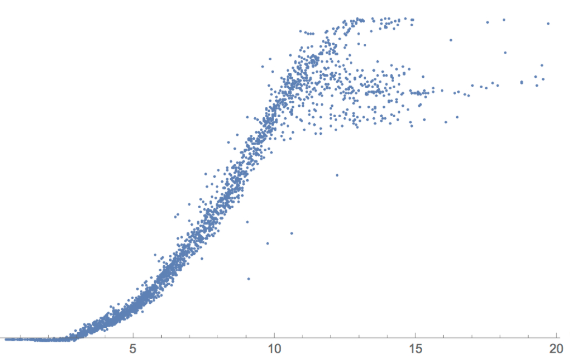 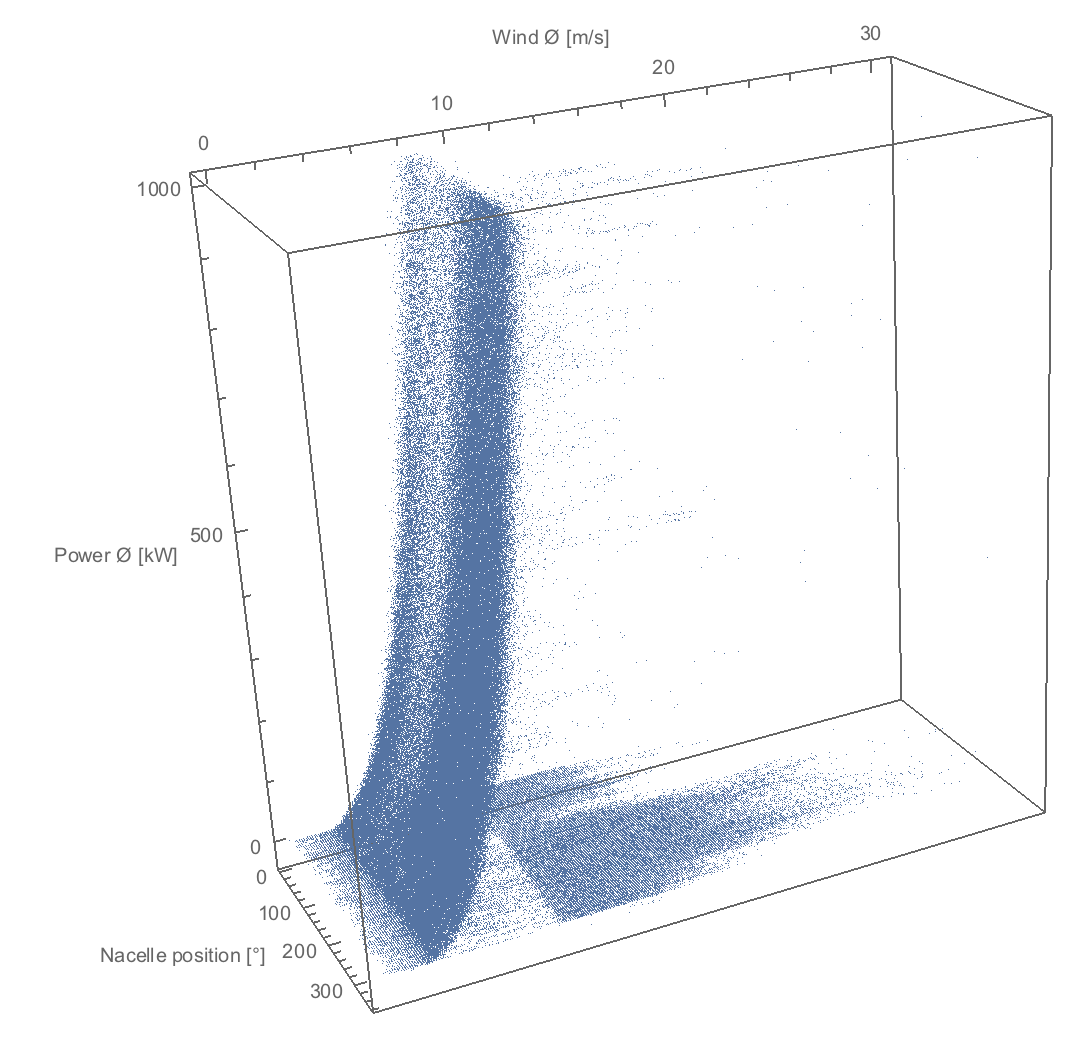 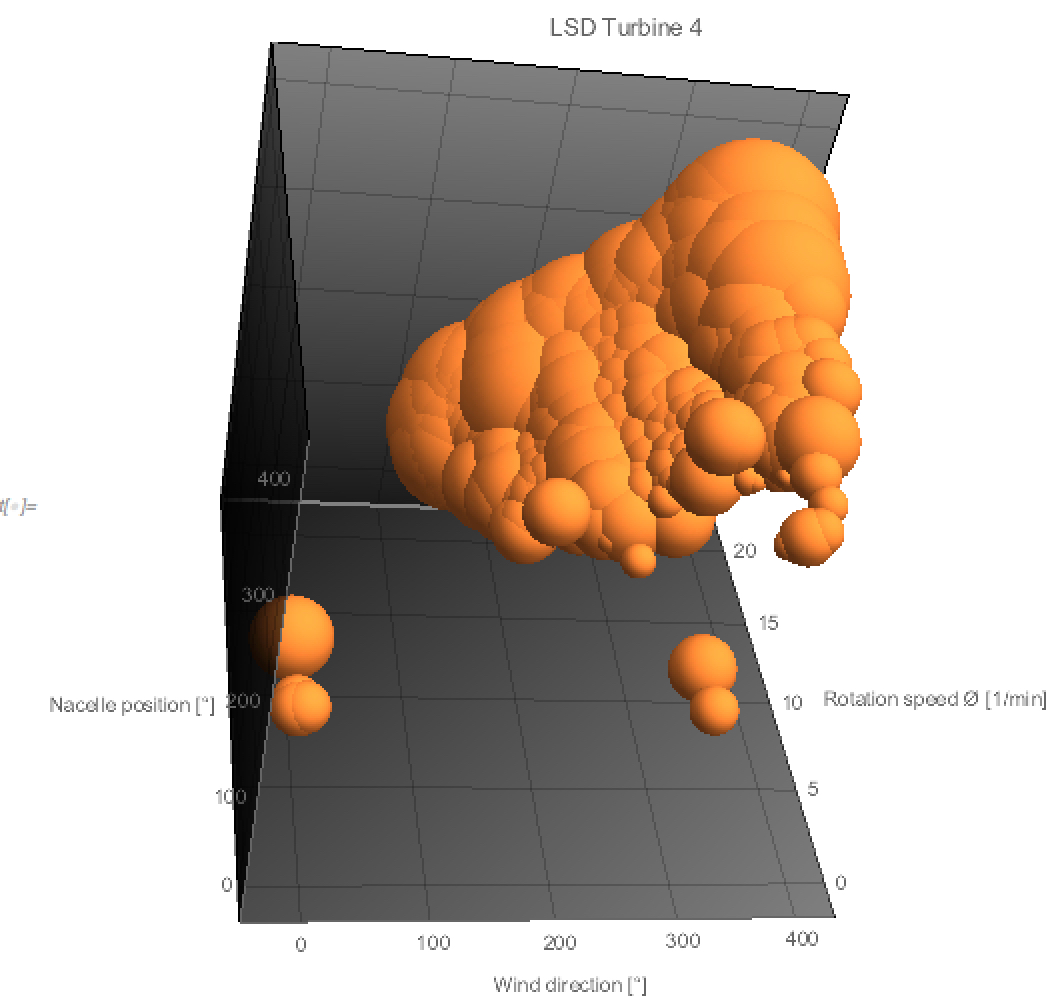 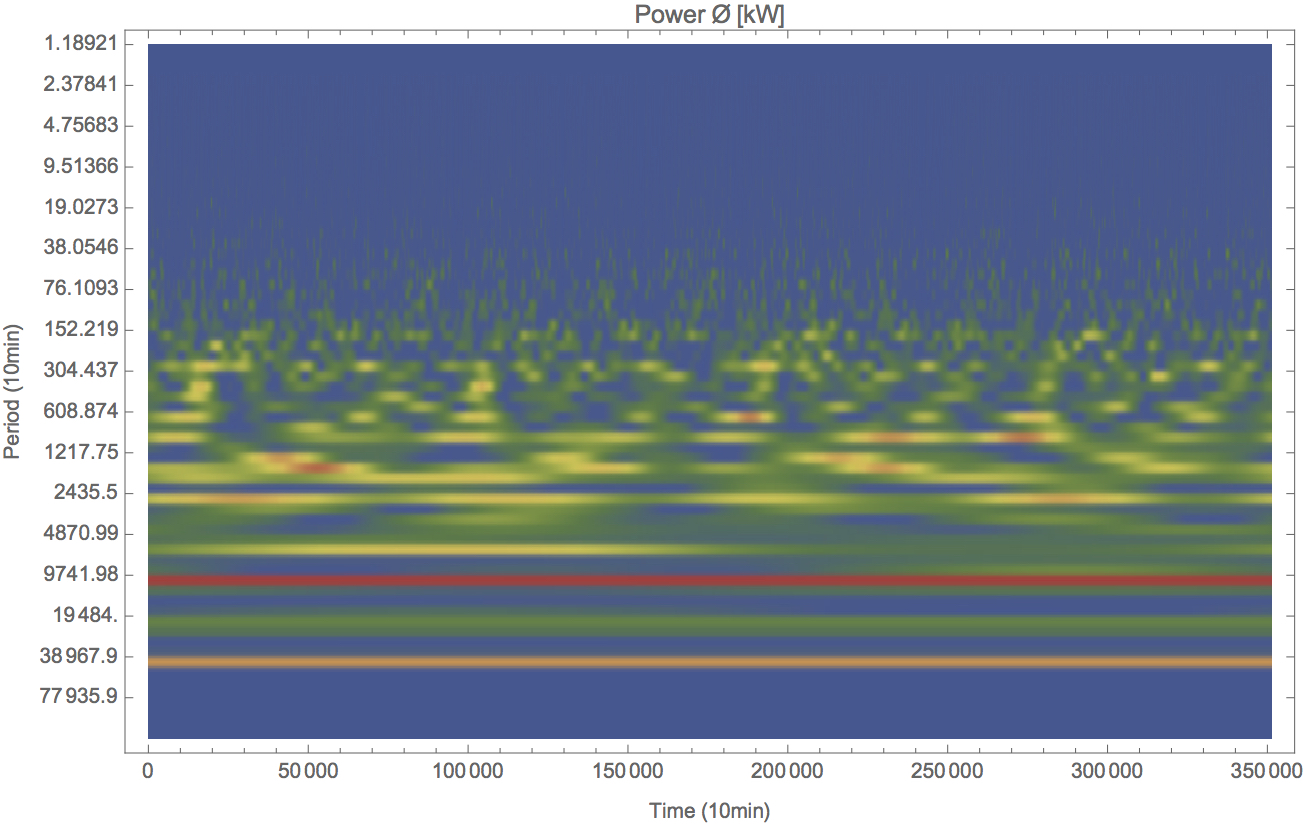 Each wind turbine has large set of parameters governing its operations and dynamics.

Algorithm searches for the most optimal set of input variables to produce a Predict function of highest accuracy:
https://en.wikipedia.org/wiki/Feature_selection

From the above list of variables 1 to 7 could be chosen for input vector, combinatorically, to predict another parameter (in the next time unit which is 10 mins).

Multiple algorithms also variated along side the input parameters to search for the best combination of algorithms and input vectors: 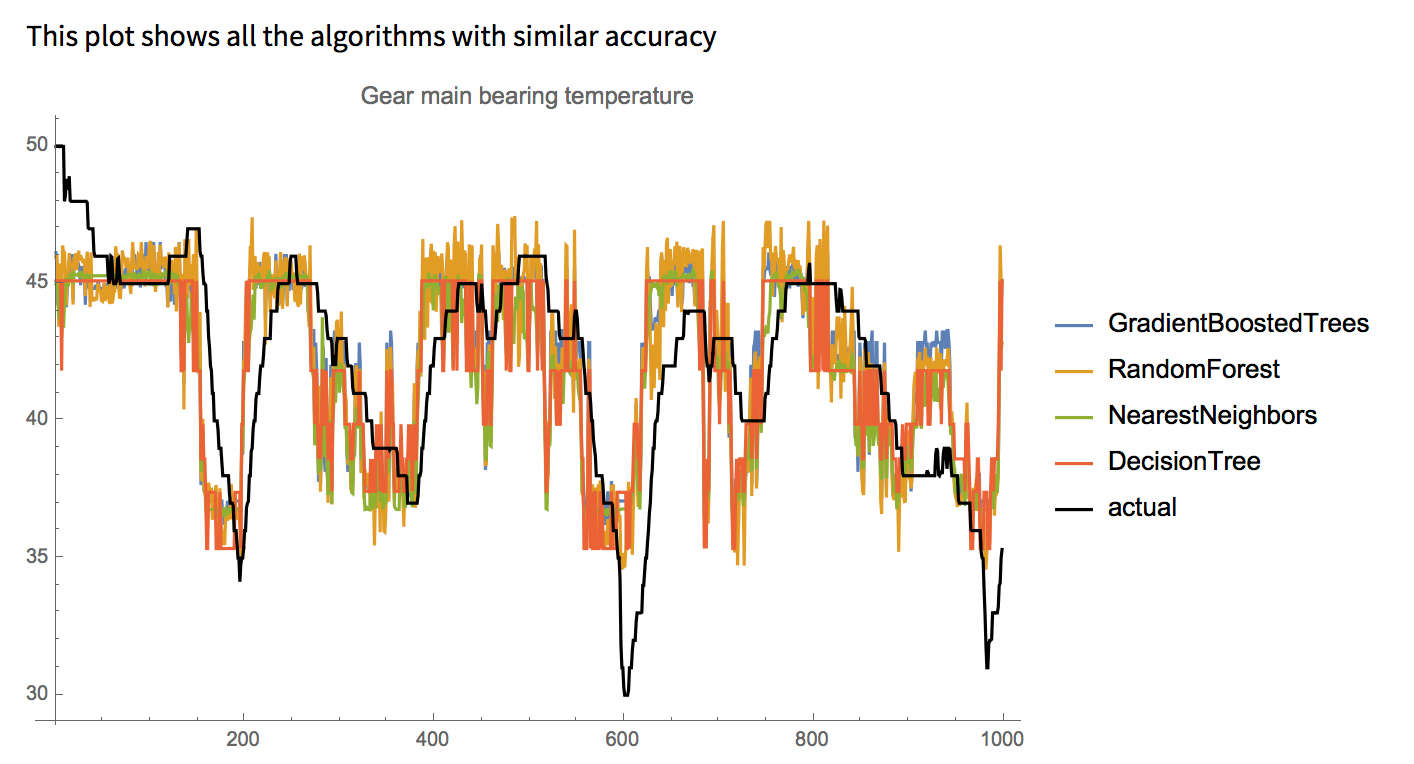 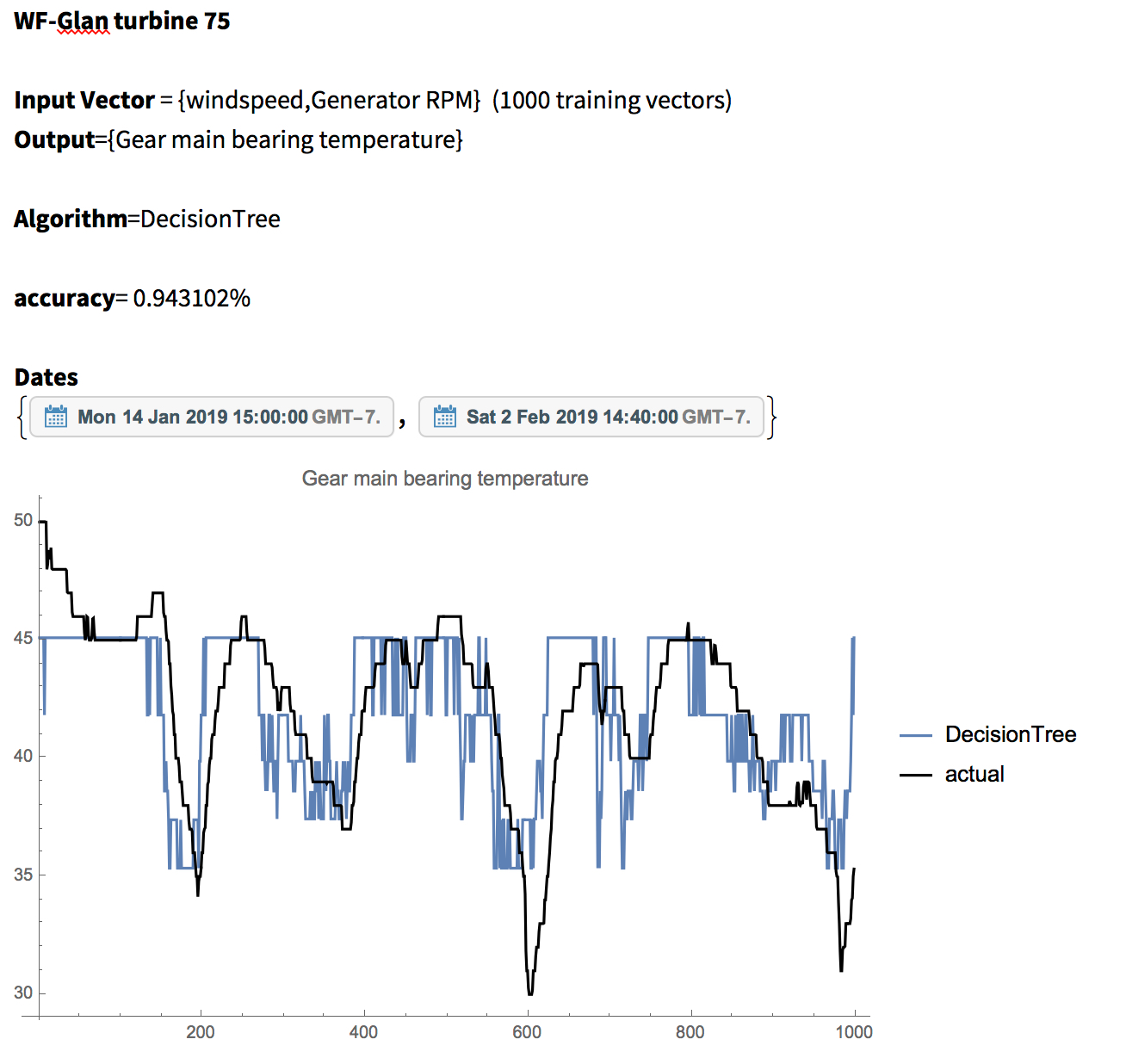 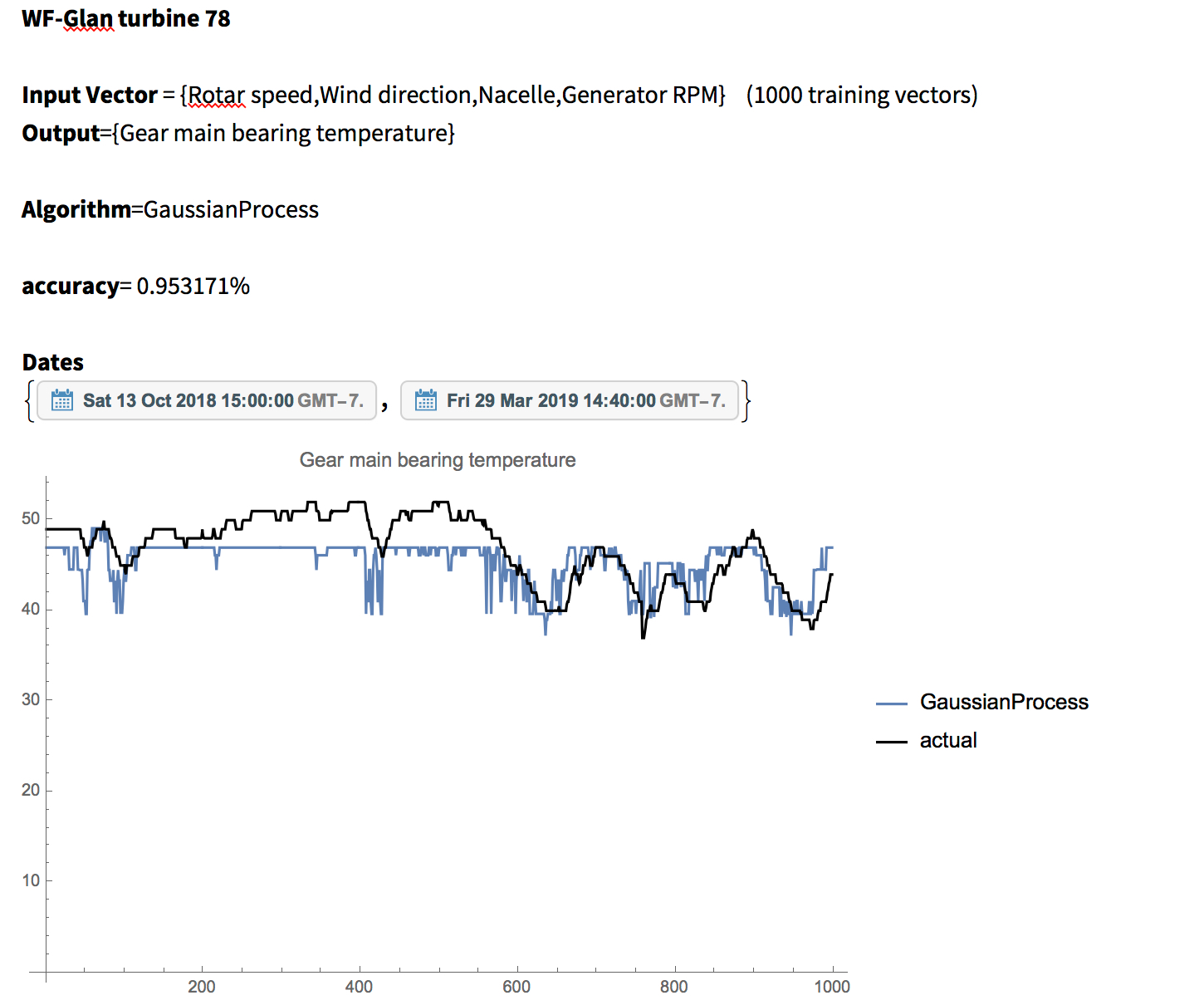 All combinations of the input parameters, total 127.

Each search for the optimal input vectors and predict algorithm took 10-15 mins of time on a 64 cpu core Linux server with 1 TB of physical memory. Approximately 40G of memory consumption and all 64 cpu cores 100% pegged.

For a wind farm of 100 turbines roughly 24 hours needed to search for the optimal input vectors and predict algorithms.

Each plot above takes about 15 mins of computations on all 64 cpu cores.

On smaller machine the above is unattainable since 1 run of the algorithm would take 8-10 hours!

Note: Ensemble of algorithms performed on larger multi-cpu servers to search for the most optimized algorithm from the bunch e.g. Gaussian Process was found to be the best Predict function on that specific data for the specific interval of time. This search might yield different candidate for different dates.

Currently the Similarity algorithm is inter-turbine measuring how similar the turbine behaves apropos of its past historical data.

In the future development we shall definitely provide intra-turbine similarity to compare turbines. 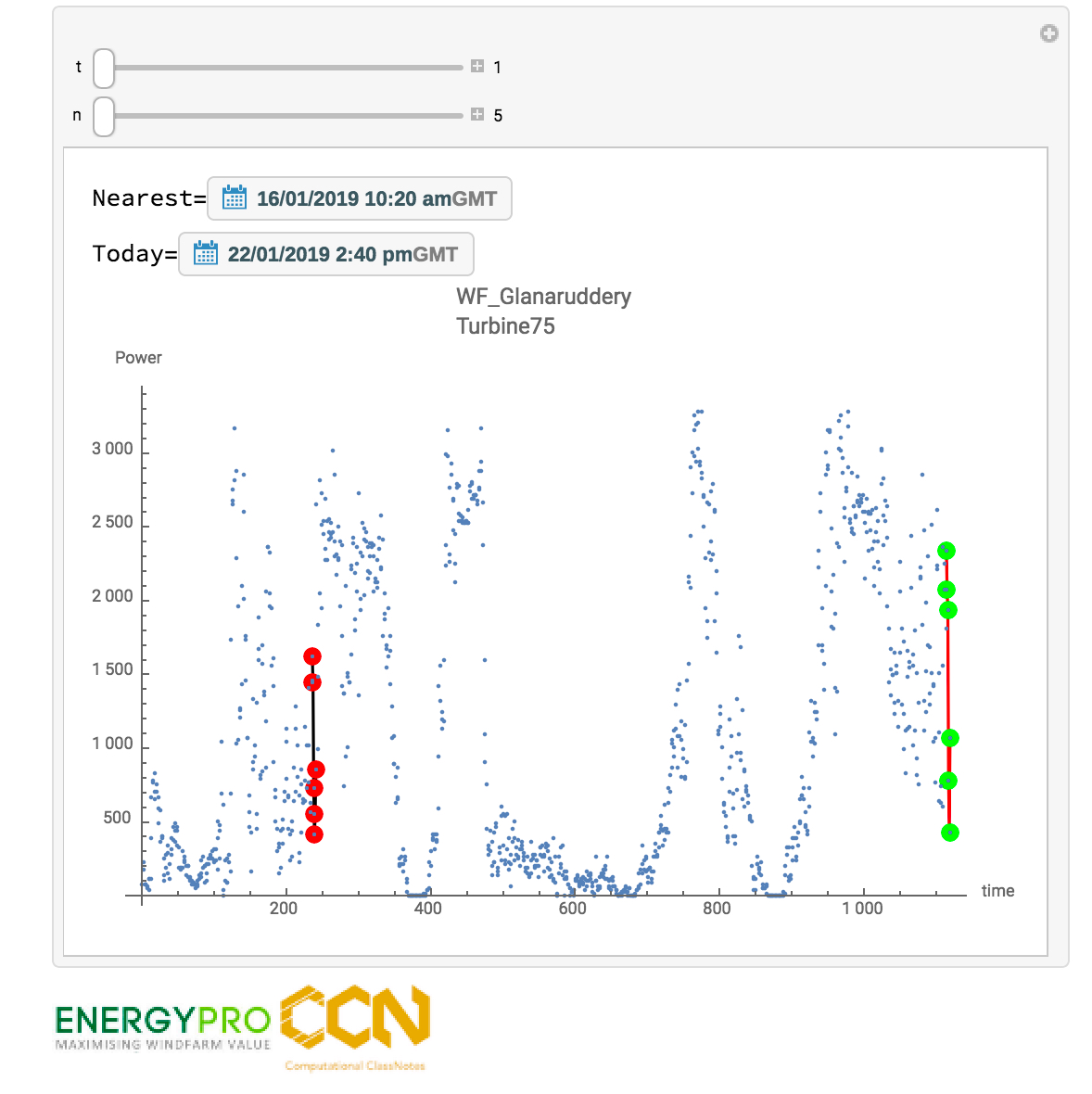 At the helm of the management of wind farms, daily computed Classifiers are provided with mobile web access.

Turbine id allows for its classifier access. Number of mix-mode parameters could be entered by the management into the input boxes of the classifier web interface.

Upon pressing the button Classify! A Class is computed accordingly.

In the CloudNote below Rotation Speed and Wind Speed and Nacelle Position are entered by the user and in return Power Level Classes issued from A (high power) to F (no power) and gradatations in between by B, C and D letters representing classes.

DBSCAN or Density-based spatial clustering of applications with noise is a useful type of clustering suitable for measuring and viewing Power scatter plots of wind turbines that might in general all look the same but the density clustering render which part of the power curve was occupied by the data points most.

The following blue-ish scatter plot does not tell us much about the clustering of the power output but the corresponding density cluster with color code tells us where the turbine spent most of its output namely Red most dense Yellow least and the other colors gradations in between. 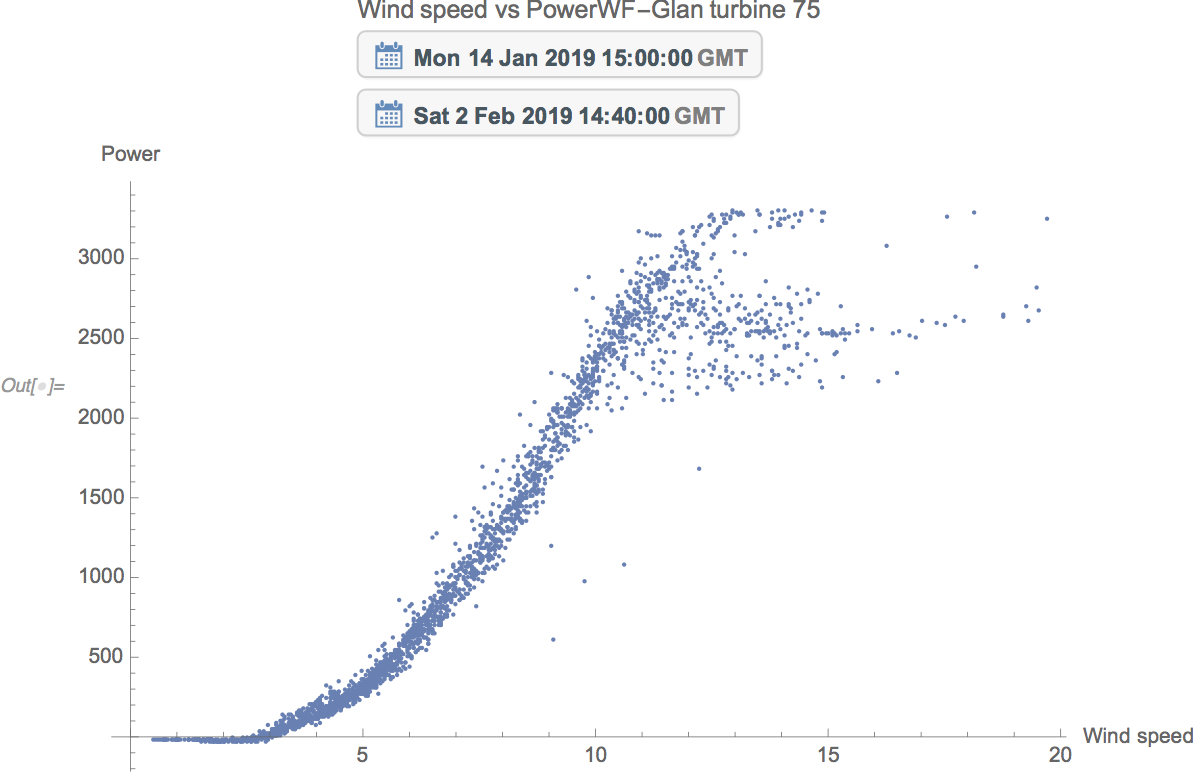 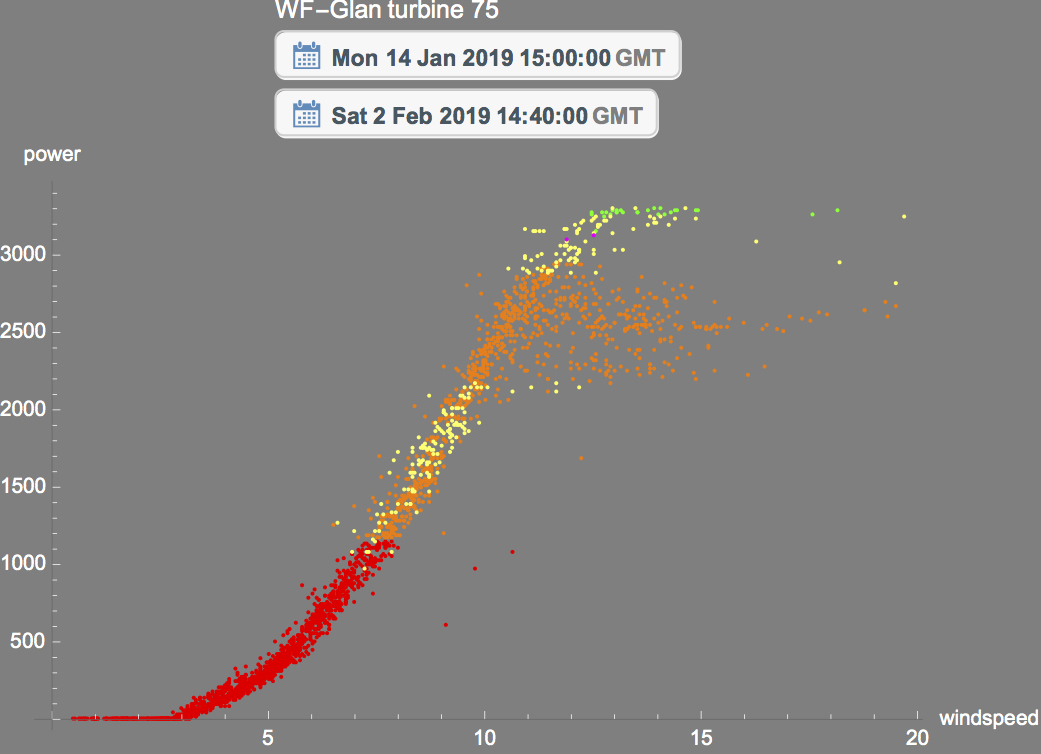 Each node is a scanned data point for a singl turbine. .

Highlighted number is the accuracy for Classification of output in this graph. 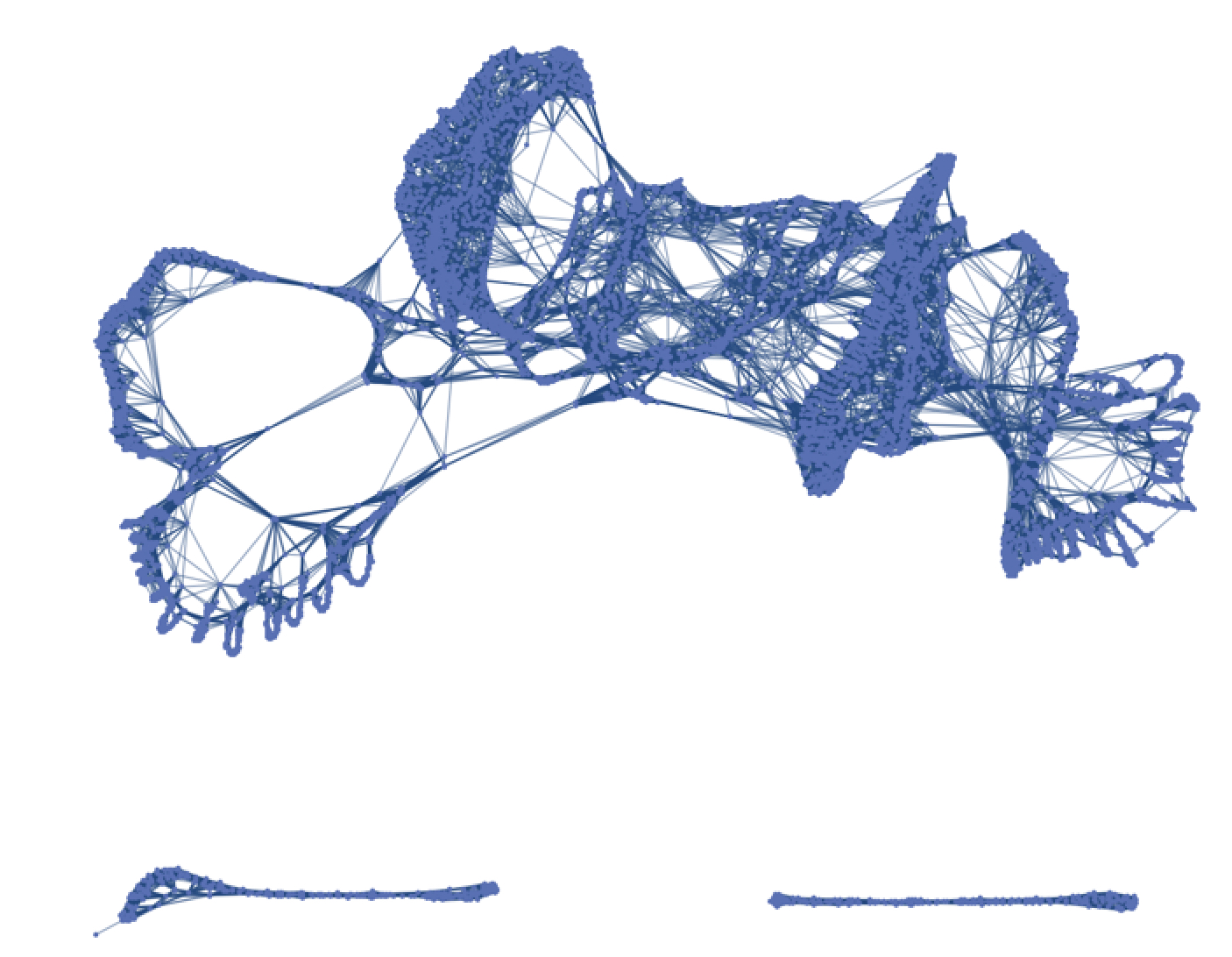 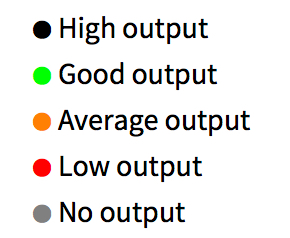 Mouse-over pops the tooltip including all the pertinent data. 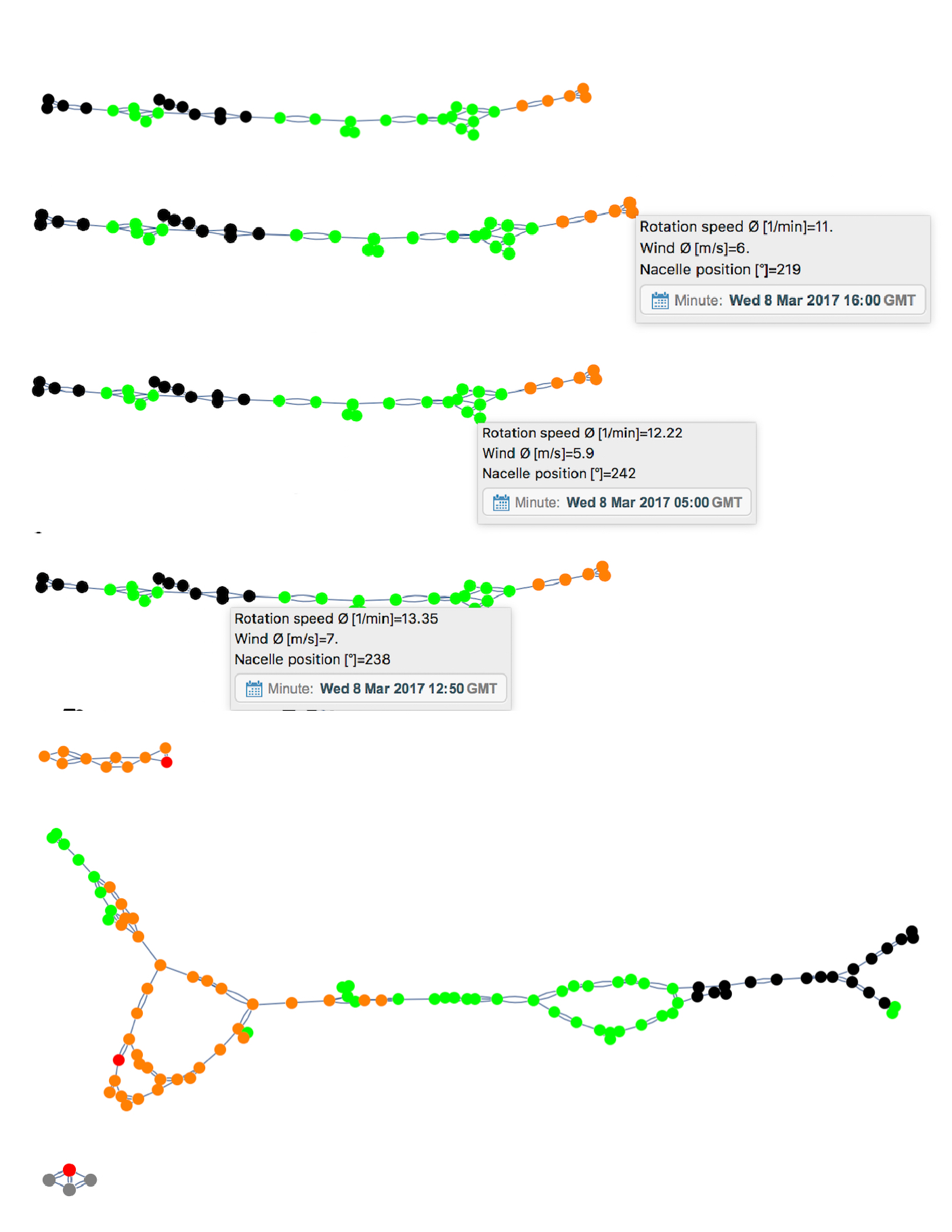 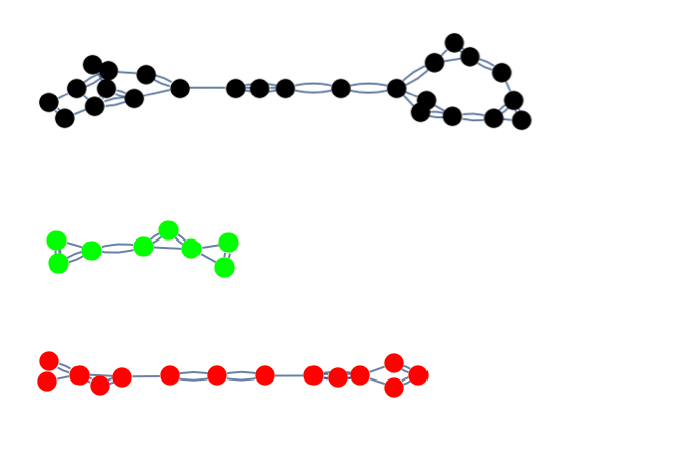